On the Olympic Trail

On October 10, 1964, Tokyo held its breath as Yoshinori Sakai, a 19-year-old runner born in Hiroshima an hour and a half after the atomic bomb was dropped, took to the podium in the Tokyo National Stadium to light the Olympic flame.  With the opening of the 1964 games, Japan  became the first Asian country ever to host the event.

In a few short months from now (October 2009), Tokyo will find out whether it will have a chance to do it all again, as the International Olympic Committee announces which city (Tokyo, Madrid, Chicago or Rio De Janeiro) will host the 2016 Games.

To commemorate this event, here is a look, along with some pictures I have taken, at a few of key Olympic venues in 1964 which are all still in use today.

Tokyo National Stadium in Meiji Shrine Outer Park was at the heart of the action in 1964, hosting the opening and closing ceremonies as well as the track-and-field competitions.  With a capacity of over 57,000, it remains one of the largest stadiums in Japan. 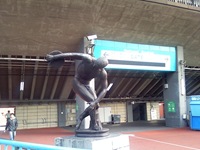 The Nippon Budokan (Japan Martial Arts Hall) in Kudanshita was built specifically for the judo competition in the 1964 Games – the first time that the sport had been included in the Olympics.  Its eye-catching octagonal structure and the onion-shaped sculpture on the roof were modeled after the Yumedono (Hall of Dreams) at Nara’s Horyu Temple.  The venue can hold over 14,000 people, and continues to host annual martial arts competitions and pro wrestling matches.  It has also become synonymous with rock concerts, a trend that started when The Beatles appeared there in 1966. 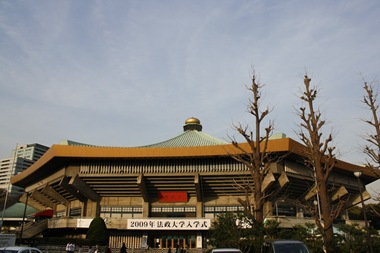 Yoyogi National Gymnasium in Harajuku hosted the swimming and diving competitions in 1964, and its 50-meter pool is now open to the public.  The building’s innovative suspension-roof design, widely praised at the time, was created by renowned Tokyo architect Kenzo Tange, who also designed the Tokyo Metropolitan Government Building in Shinjuku and the Fuji TV Building in Odaiba.  Its two halls can hold over 10,000 people and are frequently used for sports tournaments and large-scale concerts. 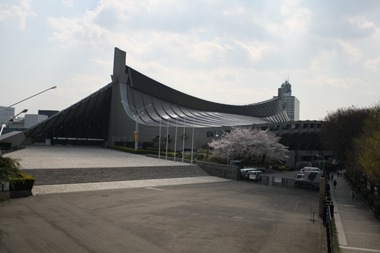 Komazawa Olympic Park in Setagaya is another complex that has enjoyed continued popularity since 1964. It is home to the Olympic Tower, an imposing concrete structure that served as the control center during the Games and resembles nothing so much as an enormous game of Jenga.  Nearby, the 22,000-capacity Komazawa Stadium hosted the wrestling, hockey and volleyball competitions, and is now used for soccer matches. 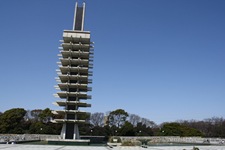 Who do you think will host the 2016 Summer Olympic Games?  TokyoFive (read his recent blog post about the 2016 Olympics) and I are rooting for Tokyo.

8 thoughts on “On the Olympic Trail”